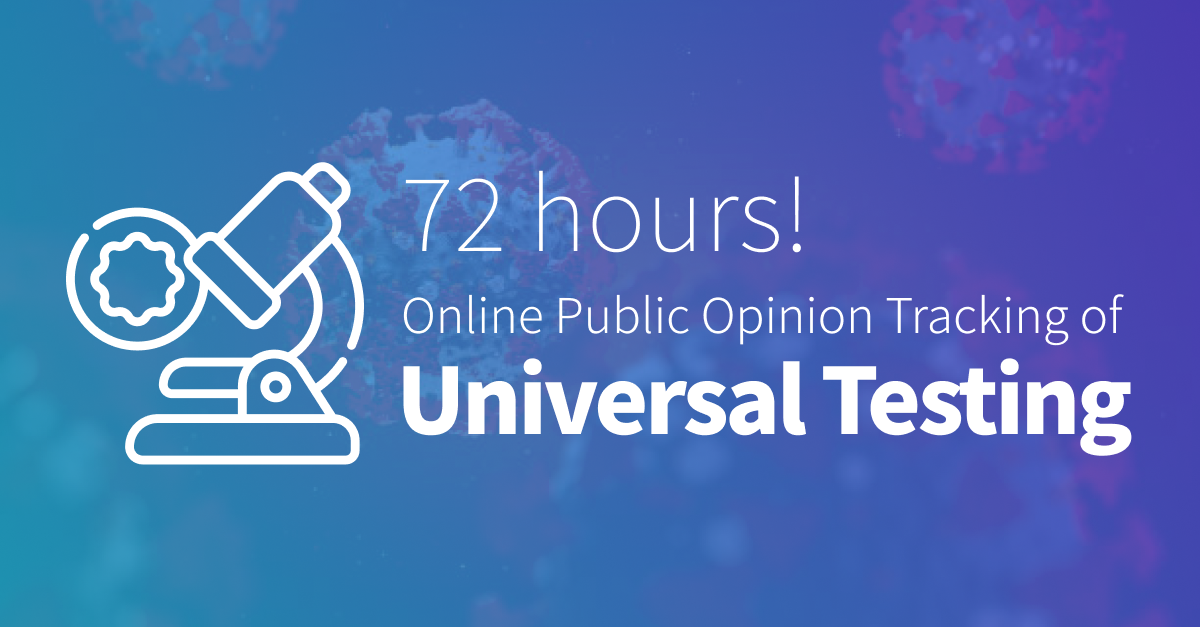 Free voluntary Hong Kong-wide testing
Being based in Hong Kong, Wisers is keen to stay up to date regarding all the news and updates related to the current COVID-19 pandemic. The "Universal Community Testing Programme" is one such important local anti-epidemic policy which was announced recently. Our goal is to use big data to help the government and all sectors of society to accurately and comprehensively understand the public’s thoughts on this policy, providing an objective and reliable reference for future policy formulation. 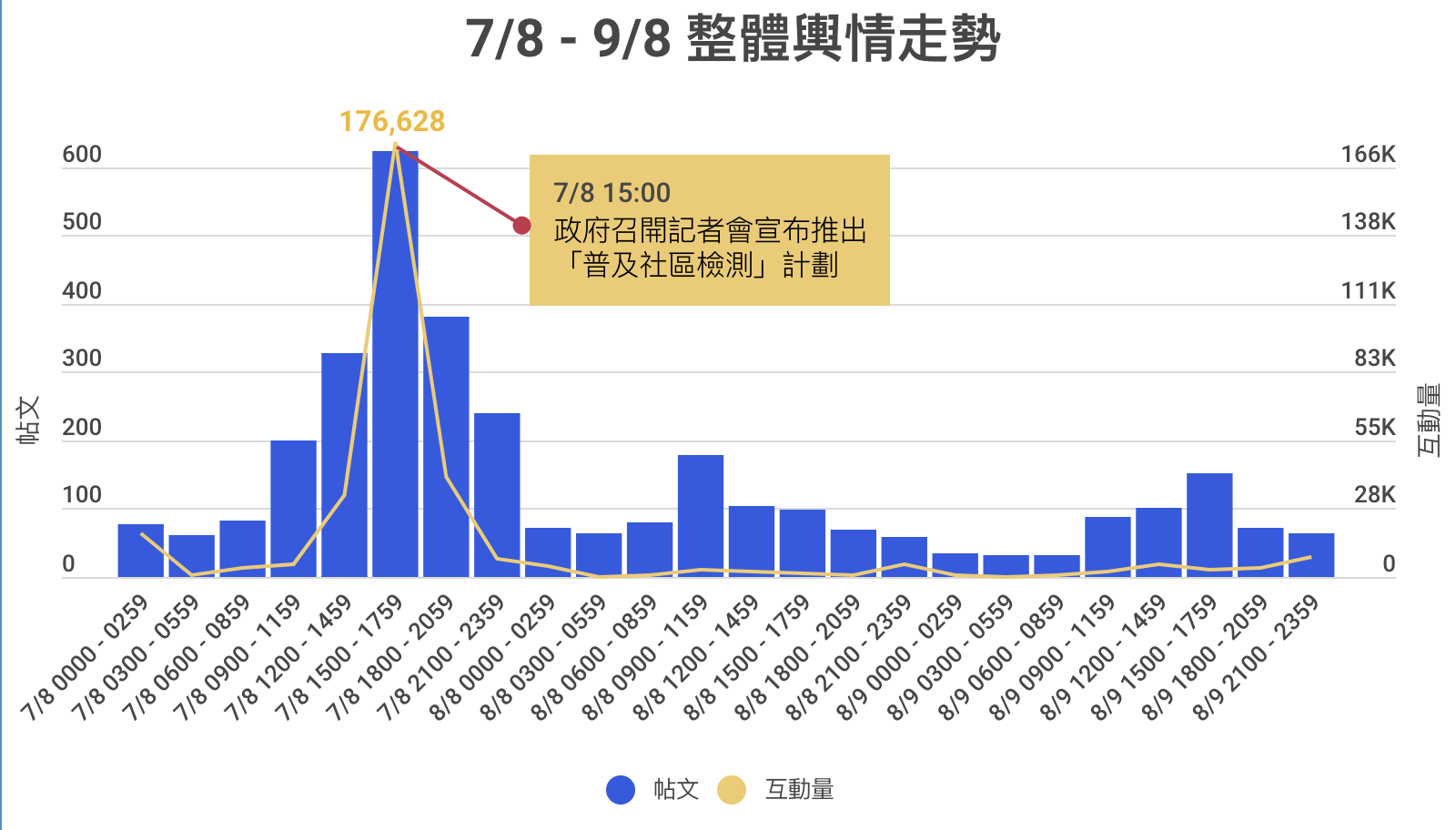 Hottest period:
From the big data trend chart, it can be seen that the interest in the policy was focused and short: the most intense period of public opinion was within 3 hours from the release of the government press conference (from 3 pm to 6 pm on August 7), which triggered 176,628 interactions. This accounts for nearly 80% of the total interactions over the 72-hour period. However, both the number of interactions and the number of posts dropped significantly after this. Amongst the two variables, the number of interactions fell the sharpest. The number of interactions for the whole of August 8 was less than that of August 7 from 12 am to 3 pm, with only 16,772 (total interactions were nearly 6%).
These results are reflected in the short-lived heated discussion at the press conference. Even though some pages still had attention, the original discussion focus had lost the attention of netizens. Driven by the lack of new focus, public opinion is unsustainable even the day after the press conference.
The discovery of "The Hottest Post" further reinforces this point.

Hottest posts
In the 3 days, the hottest posts were all from August 7th:
1. "Chief Executive Carrie Lam and a number of officials will open a press conference in the afternoon. It is expected that voluntary testing arrangements will be announced. The background picture of the press conference reads" The Chinese Central Government fully supports the SAR to fight the epidemic" (Stand News Facebook page). The number of interactions for this post reached 10,174.
2. "Several press releases got the news saying that Carrie Lam will meet with reporters at 3pm and is expected to announce free testing for all people... " (100Most Instagram account). This post received 9,499 interactions.
3. "The government is finally willing to conduct Hongkong-wide testing" (Hong Kong discussion forum Instagram account). The number of interactions for this post reached 9,462.

In online discussions regarding the community testing programme, the positive and negative views are as follows:

The negative views──
i. The top 3 negative hot words are "government(政府)" (1695 times), "mainland(大陸)" (911 times), and "close borders(封關)" (819 times)
ii. People worry that the government will abuse the Hong Kong-wide testing policy by using it as an opportunity to collect genetic data and to flatter the Chinese Central Government. Commenter’s also accused the government of not listening to public opinion when it came to closing the borders, which is a decision which indirectly contributed to the third wave of the pandemic.


1. The top 3 hottest posts are focused on holding press conferences and announcing policy. They are not commenting on the policy itself. One can see that within the first 72 hours of the announcement, the public was very concerned about the arrangements and details of the new anti-epidemic policy. However, comments on the policy itself have not become the mainstream of public opinion.

Note that although the word "government(政府)" is listed on both the positive and negative word lists, it appeared more than 5 times more often in negative comments than it did in positive ones, making it even more prolific than "mainland(大陸)" and "closed borders(封關)". From this, it is clear that public opinion towards the government is very unfavourable. Furthermore, there are plenty of strong and sensitive words or phrases on the list of negative words "send to China(送中)", "garbage(垃圾)", and "profit transfer(利益輸送)”.

This indicates that although the topic of "Hong Kong-wide testing" is not hotly discussed, it has considerable potential to provoke the emotions of the Hong Kong people. It is recommended to continue to pay attention on the public opinion towards the policy.


2. Combining the above 2 points, and according to chapter 3 of the ‘Wisers’ Online Epidemic Report 2.0’:  ‘Comments on Anti-epidemic Policies on the Internet: Summary of Key’, we can see that as a whole, "border closure(封關)", "quarantine(隔離)", "social distancing rules(限聚令)" and "anti-epidemic measures(檢疫)" accounted for more than 90% of post volume and 95% of engagement.

This clearly reflects the government’s implementation of the "Universal Community Testing Programme" in response to many citizens’ demands.